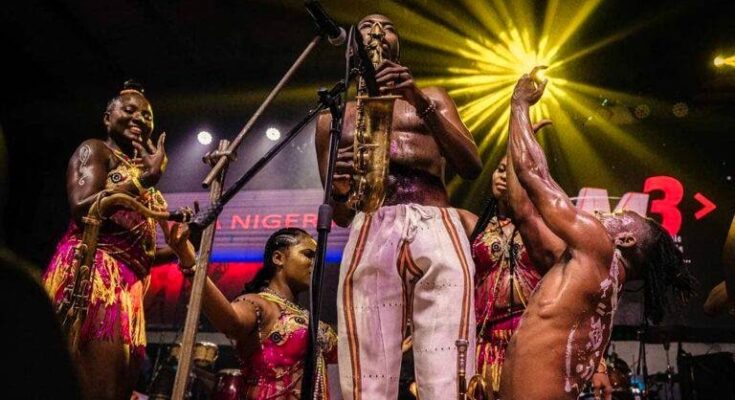 Made Kuti Comes Of Age On Stage, Makes Father Proud

Rising Afrobeat musician, Made Kuti has come of age and is no doubt ready to take over the world music scene.On Friday, October 29, 2021, the 25-year-old multi-instrumentalist rendered a mind-blowing experience at his second concert with his band, The Movement.

After leaving a memorable musical experience in the minds of music lovers at the debut of Made Kuti & The Movement at Terra Kulture in July 2021, the song machine returned for a second concert with The Movement band at the Oriental Hotel.

The concert, which was anchored by Omo Baba, also had his protege, Kojah Kaze giving humour support to the delight of guests that included Afrobeat legend, Femi Kuti, Funke Kuti, Yeni Kuti, Funlola Aofiyebi-Raimi, Edi Lawani, Sulaiman Aladeh, and Azuka Ogujuigba amongst others.

The show, which was packaged by FK Management with support from Trophy Stout, Lagos Inland Revenue Service, and Soundicty, also had guest appearances from Made Kuti’s regular collaborators, The Bandhitz and Cavemen.

Made’s heart-warming performances began after his regular collaborators, The Bandhitz and Cavemen had thrilled the guests making the night filled with a blend of Afrobeat & highlife. Performing songs from his debut album For(e)ward which include ‘Free Your Mind,’ ‘Your Enemy,’ ‘Blood,’ ‘Different Streets,’ ‘Higher,’ ‘You’ll Find,’ and ‘Hymn,’ as well as some unreleased songs, Made held guests spellbound and left them with something to always remember.

Made gave a sterling performance in two hours such that his father admitted he has come of age and is ready to take over the world.

“His performance was electrifying and on point, I couldn’t be more proud,” says Femi Kuti

TAGMade Kuti
Previous PostI Used To Be The Loving Type But Not Anymore, Say Bukola Ikuomola Next Post99 Killed In Fuel Tanker Blast