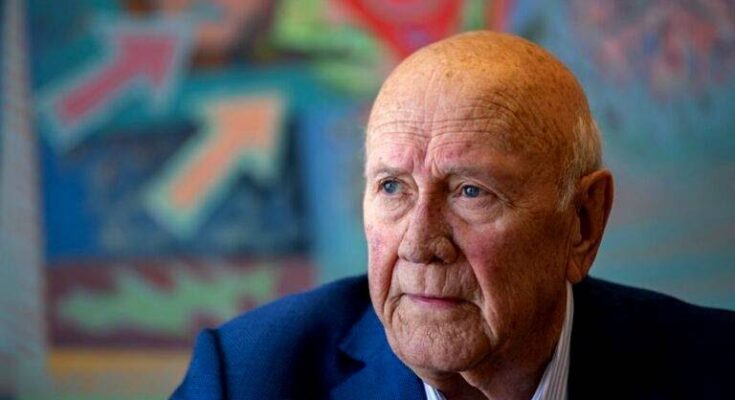 Mr De Klerk was the last white man to rule South Africa, between September 1989 and May 1994.

It was he who released Nelson Mandela from prison before the latter contested and won the South African presidential election.

The statement from his Foundation read: “Former President FW de Klerk died peacefully at his home in Fresnaye (Cape Town) earlier this morning following his struggle against mesothelioma cancer.”

In March, Mr De Klerk was diagnosed with mesothelioma – a cancer that affects the lining of the lungs, but he “started a course of immunotherapy.” His foundation said then that there was no immediate threat at the time “and we are confident that the treatment will be successful.”

In February 1990, he announced sweeping reforms that marked the beginning of the negotiated transition from apartheid to democracy.

His actions helped bring an end to apartheid-era South Africa, and he became one of the country’s two deputy presidents after the multi-party elections in 1994 that saw Mr Mandela become president.

His efforts to remake the National Party that his grandfather helped create, from a white-dominated organization into a multiracial one with the clout of the Action National Party (ANC), fizzled.

Frustrated, Mr De Klerk announced his retirement from politics in 1997.

Earlier in 1993, Mr De Klerk won the Nobel Peace Prize, an award he shared with Mr Mandela, but the relationship of the duo was born out of necessity. according to Mr Mandela.

In his own autobiography, “Long Walk to Freedom,” Mr Mandela, quoted by New York Times, said: “To make peace with an enemy one must work with that enemy, and that enemy becomes one’s partner.”

“Despite his seemingly progressive actions,” Mr Mandela wrote, “Mr De Klerk was by no means the great emancipator. He was a gradualist, a careful pragmatist. He did not make any of his reforms with the intention of putting himself out of power. He made them for precisely the opposite reason: to ensure power for the Afrikaner in a new dispensation.”

Mr De Klerk is survived by his wife Elita, his children Jan and Susan and his grandchildren, the foundation said, adding that the family would in due course make an announcements regarding funeral arrangements.