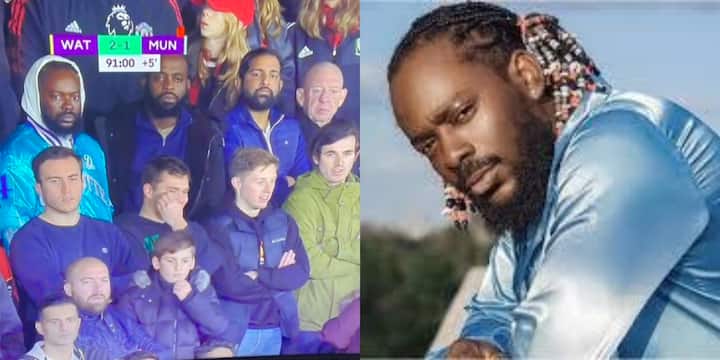 Popular Nigerian musician Adekunle Kosoko popularly known as Adekunle Gold has been subjected to online trolls after he was spotted with a sad look at the Vicarage Road stadium.

The Man United fan was part of the spectators at the stadium to watch the Red Devils trade tackles with their host Watford in a Premier League fixture.

A check by Legit.ng on Adekunle Gold’s Instagram story showed he was in a great mood going into the game, but that was soon going to change as Man United suffered an embarrassing 4-1 loss to Watford.

But one particular moment from the match has got Nigerians talking as Adekunle Gold was seen in the 91st minute wearing a sad look in the midst of the crowd at Vicarage Road stadium.

Do you have a groundbreaking story you would like us to publish? Please reach us through info@corp.legit.ng!

After the match ended, the picture went viral on social media as Nigerians started tagging him with several funny captions.

Below are some of their reactions

Saddam said: “@adekunlegold we are suffering at all fronts.”

Alhaji said: “@adekunlegold you watched the game live from the stadium, why didn’t you step in.”

However, Adekunle Gold was having none of the trolls as he posted this: “Anybody wey @ me for that picture again, I fit break pesin head, I’m pissed.”

Just in: Simi and Adekunle Gold welcome their first baby