5 Secrets To Choose the Best Watermelon

by The Source
in Health
0

Watermelon is a refreshing, juicy fruit that is perfect for anywhere, whether at a barbecue or the beach. Although summertime is generally considered peak watermelon season, you can enjoy this well-rounded treat all year long, especially if you know secret tricks to choose the best watermelon.

Picking the perfect watermelon to take home and crack open can sometimes feel like a guessing game. How do you know if you will end up with a watermelon that is sweet, bitter, or totally lacking in fruity flavor?

Read on to find out how to choose the best watermelon for you, and also be sure to check out Secret Side Effects of Eating Watermelon, Says Science. 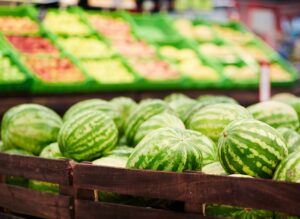 Of course, the exterior of a watermelon should appear mostly green—but green isn’t the only color to consider when on the hunt for the best watermelon at the grocery store. One way to ensure you’re picking a watermelon that’s ripe and ready to serve is to examine the yellowish spot on its rind.

Known as the watermelon underbelly or ground spot, this coloring inconsistency occurs on the underside of watermelons due to their former positioning while still growing on the vine. Receiving the least amount of sunlight, the yellow pigmentation develops on the side of the watermelon that had direct contact with the ground.

“The underbelly, or ground spot, should not be orange,” says Manaker. Elaborating further, she explains that a watermelon is likely overripe if the underbelly looks sunflower yellow or nearly orange. If its ground spot appears too light or even white, the watermelon might be underripe—and if so, will probably taste more like a cucumber. “Butter yellow is ideal.” 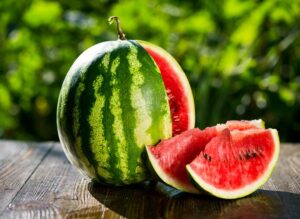 When shopping for watermelon at the grocery store, you should take note of where the watermelons are located within the produce department.

“Watermelon is a hydrating fruit that is loaded with key nutrients and has a natural sweetness with no added sugar,” says Manaker. “When shopping for watermelon, one tip is to make sure your melon isn’t housed near the bananas at the store.”

Why? According to Manaker, bananas emit an ethylene gas that can cause the watermelons to spoil more quickly. It’s also important to make sure there is some distance between your watermelon and any ethylene-emitting produce you might have when storing your fruit at home.

“Make sure you keep your watermelon away from bananas once you’re home, too,” says Manaker.

3 Don’t focus on the pattern. 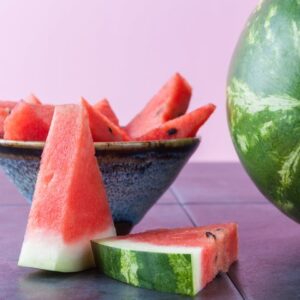 Watermelon with slices cut out
Shutterstock

Rumor has it that there is a correlation between watermelon ripeness and the stripes that appear on the watermelon’s rind. However, Manaker explains that this is simply untrue.
“Despite what you may hear on social media, striping is not an indicator of ripeness,” says Manaker. “The reality is, some watermelon varieties don’t even have stripes, and others naturally contain thick ones.”

No matter how the external pattern appears, you can always enjoy a whole watermelon in its entirety.

“Remember that the entire watermelon is edible,” advises Manaker. “The juice, seeds, and even rind can can be enjoyed, making it a sustainable choice.” 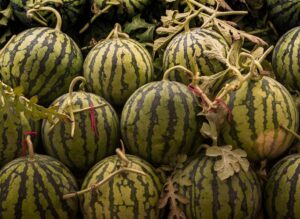 While a dried watermelon stem can indicate ripeness, a green one might mean you have a watermelon that was prematurely cut from the vine. But contrary to popular belief, watermelon stems do not always comes off the vine with the fruit when they are first harvested.

“Some people say to look for a dried stem, but not all watermelons are cut with excess stem even showing,” explains Manaker.

A particularly labor-intensive task, watermelon harvesters known as “cutters” inspect each melon’s color and size to ensure quality and ripeness prior to removing them from the vine.

“So, that [method] is a favorite of a particular farmer—not something we can use at the store,” says Manaker.

5. Mother Nature may still have her own agenda. 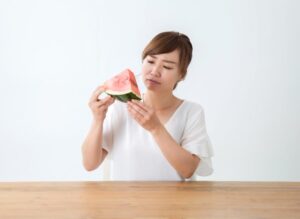 “Even if you follow all of the rules for picking the best watermelon, on occasion, Mother Nature can trick you,” says Manaker. “You can still be stuck with a less-than-ideal watermelon, even if it checks all of the ‘best’ boxes.”

Islamic Finance Sector To Grow In Crypto, Others – Report

5 Fruits To Give Your Skin That Spotless Ageless Glow

‘Health Insurance Would Be A Relief’