Adeleke’s Visit to Buhari and the wailing Osun APC, By Seyi Adeniyi 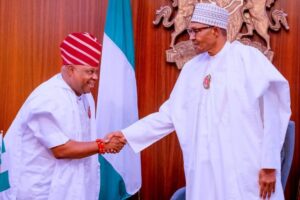 Constitutionally, the tenure of President Muhammadu Buhari ends on May 29, 2023 (in less than five months). Meanwhile, the president has made it clear that one thing he is going to leave behind is a more united country. Also, he promised to deepen our democracy.

Recall, when President Buhari was making his inaugural speech in 2015, he made it expressly clear that “I belongs to everybody and i belongs to nobody.”

To demonstrate this, immediately after Senator Ademola Adeleke was declared winner of July 16th governorship election, President Buhari sent a congratulatory message to him. Though, I’m not unaware what the Osun APC said at that time, they lambasted Buhari for congratulating Adeleke.

While the groaning was still going on, Rt. Hon. Femi Gbajabiamila sent his greetings. Some APC stalwarts weren’t happy, perhaps because the two leaders choose not to play politics of bitterness.

One would have expected Bola Tinubu who is contesting to become Nigeria President to show some levels of patriotism by congratulating the winner, unfortunately, he followed the path of his brother, Oyetola. I don’t know what Tinubu will tell the people of Osun, who are in love with the incumbent governor, by the time he comes around to solicit for their votes.

Senator Adeleke visited Buhari, first to appreciate him for signing the electoral act, which paved the way for him to win. Also, he used the occasion of the visit to made some demands. Expressly, Mr Buhari assured the people’s governor that he would look into the demands and do the needful. This really hit members of Osun APC, they lambaste Mr president again. Maybe, they aren’t aware that the presidency takes feedback from the public on a daily basis. This I’m sure would have gotten to the villa.

Expressing their grievances, some APC members said Adeleke rushed to Abuja to beg Buhari regarding the ongoing election tribunal. I asked myself, why will he beg ordinary mortal when God has already put in his hands the leadership of the State through the support of the people. Maybe they aren’t aware that Osun has rejected them, they can never be trusted again.

If another election is scheduled for tomorrow between Oyetola and Adeleke, with the support of God and the people, Adeleke will still win with a landslide. Adeleke has no reason to fear, he is enjoying people’s support and it will continue because he is doing the right thing; he is running an open governance model, which centres on accountability, transparency and sincerity.

By the time the people’s governor will be celebrating his 100 days in office, I am very sure, it will be difficult for some APC members and leaders to walk freely on the street of Osun, because people will be asking them, why is your party/government choose to impoverish people under the guise that the resources accrued to the State are minimal.

The presidency appreciates the visit, even Mr Femi Adesina, the Special Adviser to President Buhari, took to his page to celebrate the people’s governor.

“If dancing be the food of love, waltz on” ~ Femi Adesina.

Obidients Are In Politics But Know Nothing About It – Prince Adebayo

2023: Nigeria May Not Survive If Peter Obi Loses – Yoruba Group