•as Gov Bala promises level playing ground to all decampees 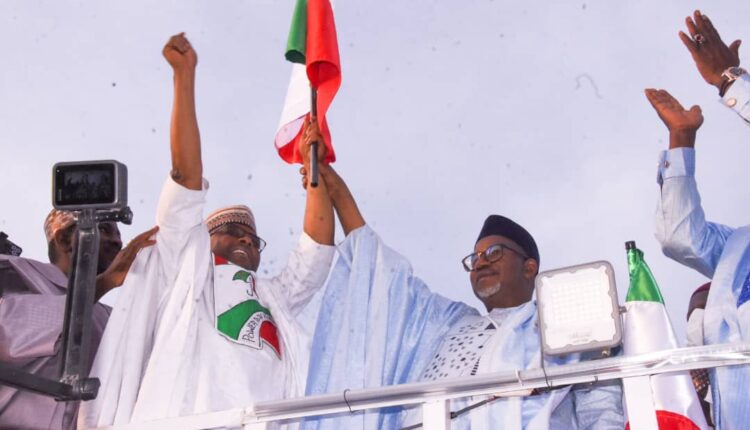 The reelection bid of Bauchi State Governor, Sen Bala Mohammed got a boost on Sunday as the gubernatorial candidate of the Allied Peoples Movement (APM), Auwal Isah Mai Takalmin Roba dropped his ambition and declared support for the PDP candidate.

Another boost for the Governor’s second term ambition is the decamping of the North-East Zonal Women Leader of the All Progressives Congress (APC), Amina Manga from the party and announced her alongside her teeming supporters joining the ruling Peoples Democratic Party (PDP) in the State.

Similarly, 132 members of different political parties including the Women Leader of the NNPP in Bauchi central, Hajiya Zulaihatu Malami have also dumped their parties to join the ruling PDP.

Speaking during PDP campaign rally in Darazo, headquarters of Darazo local government area of the state, the APM gubernatorial candidate, Mai Takalmin Roba said that his decision to set aside his gubernatorial ambition and joined the PDP was to assist in ensuring victory of Atiku Abubakar as President, Governor Bala Mohammed as reelected Governor and all the party’s candidates in the forthcoming general elections.

On her part, Amina Manga said that APC in Bauchi State lacks focus and political experience to defeat the incumbent Governor, Bala Mohammed of the ruling PDP, hence her decision to dump her party to the ruling PDP.

She said that Governor Bala Mohammed has done well in the execution of developmental projects since his assumption of office and solicited votes to the governor to win his reelection to enable him to continue to execute more people’s oriented projects.

Amina Manga warned women and youths against voting APC candidates and accused APC of failure to deliver on its campaign promises of lifting Nigerians out of poverty, hunger, unemployment among others.

Bala Mohammed who received the defectors, assured them of a level playing ground to enable them contribute positively towards ensuring the victory of all the PDP candidates in the upcoming elections.