•As contingents say event a springboard to the world 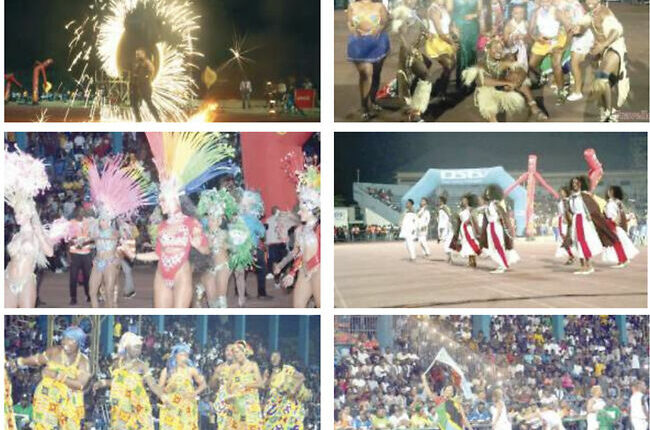 THE biggest street party in Africa, Carnival Calabar kicked off at the usual starting point, the 11-11 roundabout with unprecedented jubilation as the different bands positioned themselves for the 12km carnival parade.

It is the first after the pandemic and the turnout was massive as usual with spectators lined along the carnival street to watch and cheer the revelers as they enjoy themselves at the street party with their families and friends.
The city once again felt the razzmatazz of the street party, which is one of the peaks of the 32 days festival of the state, a yearly tourism ritual that gives everyone the opportunity to not only make a brisk business for a month , but also create time out to enjoy a long holi- day that ushered in the Christmas and New year.

Dressed in their band’s colour alongside their float, dishing out trendy music were the Freedom band, Masta Blasta, Seagull, Bay- side, CalasVegas, Passion 4, Dia- mond and other unofficial bands’ that joined the street carnival on the 12km route.

The Passion 4 band emerged the winner of the 2022 Carnival Calabar with a total score of 1,762 points while the second and third position went to Seagulls and Calas Vegas. Others are Freedom-fourth, Bay- side-(fifth), Masta Blasta-(sixth) and Diamond in seventh position.

For the International Carnival, the South Africa team dazzled with their energy and strategic style of performance emerged the winner, while Brazil and Lithuania teams came second and third respectively.

The Cultural Carnival, which paraded beautiful colours of the people’s attire and dance steps had the Odukpani LGA emerging the winner of that category, while Calabar South LGA came second and Ogoja LGA clinched the third place.

Speaking on the sideline of the carnival, the governor of Cross River State, Professor Ben Ayade, who was elated at what the carnival has become through his addition, said he was fulfilled that he had not only built on what he met on ground but also added more innovations to take it to an enviable level.

He said, “Before I became the gov- ernor, I made a commitment that I was going to internationalise the Calabar Carnival and when I was elected, I made that a reality. Today, I feel so fulfilled that we have peo- ple not just from Africa but from the entire world; from the Caribbean and Europe all gathered here, danc-ing on the street without any molestation. This shows that the melting pot of African entertain- ment is here in Calabar.

Carnival Calabar has continued to get more in- ternational reference and acceptance because of the renewed energy of the organisers and other consultants that make things happen as and when due, and this effort put together has become a statement of fact that has made the biggest street party a brand event for participating contingents.

TravelpulseandMICE in an exclusive chat with some of the participating countries was made to understand that the carnival is not only a plat- form for cultural celebration and competition, but also a springboard to other big stages in the world.

According to the leader of the Ghanaian contin- gent, Mr Kwame Dadzie” Carnival Calabar is what we always look forward to after our first and af- ter several appearances at the carnival, we have been getting more invites from global events to come and perform.

“Carnival Calabar is one of the biggest things that has happened to us and we have been im- proving on our offers to see that we come first at the international carnival presentation.

When the news was broken to us that we were coming to Carnival Calabar, I told the person that put the call through to me (Ambassador Ikechi Uko) that I was going to pop a bottle of cham- pagne to celebrate the comeback of the carnival.

“Every year when it comes to Christmas, all the world is looking towards visiting the biggest street party because if you are not here, you are nowhere; which was also the broadcast speech of the governor.”

On the impact of the carnival on the Ghana- ian group, Dadzie said Carnival Calabar is being showcased on DSTv and other platforms which took us to the international stage and this has given us a lot of gigs.

“We travelled to a lot of countries because, so many booking agencies watch the platform, and that has increased the number of invites from the world.

“As I am talking to you, there is France on the way after our performance in Calabar.”

For the Tanzania contingent, the team leader, Charity Githinji, said “ Carnival Calabar is a mas- terpiece event to reach the world through a sin- gle stage. In addition, it is a place to showcase the oneness in jointly promoting the rich cultural pride to the world.

“Our participation at the international carnival gave us the platform to showcase the rich heri tage and offers Tanzania has.

“We are calling all and sundry to come and explore the wonders of Tanzania. The carnival is a window to the world.”
The three-man contingent from Lithuania that wowed the crowd with their fireworks also see the yearly Carnival Calabar as a big platform to be.

According the leader of the group, Mr Aivaras Kurauskas, who was visiting for the first time, “The carnival is a good one. I have been attend- ing other events but this one stands out and the people are lovely and welcoming…we are look- ing forward to performing next year.

The South African contingent who came with high spirits to the 2022 edition of the Carnival Calabar said there is no be better way to show- case Africa culture.

“The Carnival is unique and has been getting better year after year with our energetic performance.”

When asked on what to expect at the 2022 edi- tion of the carnival, the leader of the South African team, who said she was overwhelmed and fully prepared, said they had come to win and nothing else.

“We are fully prepared and we are going to thrill the crowd with our culture.”