Hunters’ adventure to forest of thousand daemons at OAU 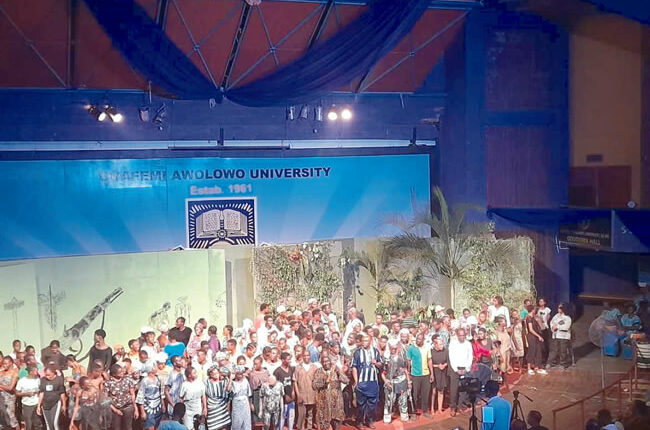 Femi Osofisan’s Adventure in The Forest of A Thousand Daemons, a stage adaptation of Fagunwa’s Ogboju Ode Ninu Igbo Irunmole (Brave Hunter in the Forest of Daemons) was staged with pomp as the 46th convocation play of Obafemi Awolowo University, Ile-Ife at Oduduwa Hall on December 8, 2022.

Retaining the original title and characters, realisation of the stage adaptation of the Yoruba novel by Osofisan was basically through storytelling technique, pantomime, characterisation of strange creatures and animal characters.

The story dramatises the exploit of Akaraogun in the forest of daemons. Encounters and triumph of the brave hunter with different strange creature is narrated and celebrated with merry making that keeps his town men and women in festive mood. Envious and threatened by growing popularity of Akaraogun Chieftain of the town poison the mind of the king against him. While still basking in the euphoria of his successful hunting expedition to the forest of thousand daemons, the king summons Akaraogun for an errand to mount Langbodo.

The message with ulterior motive is to obtain from the king of Langbodo the secret to empower for a long and prosperous reign knowing the obstacles that lies ahead.

There is strict adherence to playwright’s word and actions in a style that is true to the script.

Creative directors on the other hand add concepts, designs or interpretation a top the playwright’s words that were not intended by the playwright. This later approach dominated the production with the director’s artistic vision.

This is characterised in fusion of songs, dances and attempt to animate the animal characters in the dramatic universe;

In line with this vision, the acting style of upcoming theatre artists was also an hybrid of traditional and the modern in humanization of the fictional character to the admiration of the audience.

This is typified in folk songs and dance, signature  tuned with talking drum and chant to herald the arrival of Akaraogun (acted by Dipeolu Afolabi).

Subsequent narration of Akaraogun’s adventure to Igbo Irunmole was punctuated with ecstatic chant of the dimunitive chanter (Muminat Abdullahi) and the highly evocative praise singing of Ayan (Araba Oluwatomiwa). Aside from true to life characterisation of fictional Akaraogun, creativity of Afolabli came to the fore in incorporation of the hunter’s chant (Ijala) in his merry  making.

As the narration of Akaraogun’s strange encounter  with daemons continued with rapt attention of his kinsmen, enactment of his first encounter with one of the daemons, Agbako (Obed isibor was captured in pantomimic combat with the weird creature in a flashback.

The combat that stretched Akaraogun to his limit with moment of respite to sip palm wine heightens the suspense and kept the audience at edge of their seats before the miraculous intervention of Iranlowo, (Akintunde Goodness) the pretty benevolence daemon. Appearance of Iranlowo in well choreography dance in her immaculate white wrapper and her retinue of aids added spectacle to the scene. However some of the  movements of Akaraogun, chanter and praise singer among the enthuastic Kinmen looked awkard without clear motivation.

In the short; meeting point of the Oba (Rowland, Ogidan) and chiefs that preceded the flashback to Akaraogun’s encounter with Agbako, the give and take dialogue of 1st  chief (Timilehin Oyewole) and 2nd chief (Baale Noah) spiced with code mixing of Yoruba and English languages unfolded the treachery of the palace against Akaraogun

This subsequently degenerated into hot argument among the hunters to heighten their anxiety and suspense that arouse the curiosity of the audience about their destination.

To perhaps cool nerves and temper occasioned by long Sojourn on the route, the hunters recalled their exploits with mesmerising narration and pantomime.

It was while this was still on that they felt a push by unseen wall. Failure to repel the push compelled the hunters to cry out for Iranlowo’s intervention.

Again, Iranlowo’s sudden appearance with her maidens aided with sound effect douse the tension as the unseen wall retreats.

The hunters are yet to recover from the shock of sudden pull when they were again surrounded by birds in all kinds of sizes plumages, chicking and chattering noisily. Iranlowo there and then disappeared. Spectaculous enactment of the hunters’ confrontation with birds and elves were through character make up, colour and lighting to animate the human characters.

To prevent boredom and dragging of the story in the two appearances of the spirit of stories the long narration of the two parable of the animal world was dramatised with characteristics traits of the lion, tiger, fox, hyena, elephant and goat. While the miming and speech of human animals gave flesh and blood to the scene; costuming and make-up of the animals were inhibited by limited resources.

Two distinct performance skills however stand out in the two upcoming actresses who acted spirits of stories, good diction of Ogundusi Toyosi and the flexibility of Oyesiji Oluwanifemi’s body to dance rhythm.

Other upcoming talents discovered in the production to be honed are Muminat Abdullahi (the Chanter), Bamgboye Adewale (leading drummer) and Eziefule Emmanuel, the double cat for Akaraogun.

Embedded in the two stories are allegories with animals and strange creature that are relevant to the socio-political lives of Nigerians as leaders and followers. One of these instances is Akaraogun’ justification to continue the adventure in spite of the bad omen in his divination:

I tired again. And a third time. Always

the smet result. I was breathing heavily

now. Should I be wise, and forget the

Then I remembered the entire thing I had

seen that past week. The crumbling

Nation. The rampant cruelty, the

greed of our rulers, the grief on the

Streets. Was I to carry my bags lamely?

And go back to all that?

Thematic pre-occupation of leadership was further dramatised in the first story of the lion and other animals on the selfish schedule for devouring them for food.

The moral lesson in the cunny ploy of the fox that saved the herbivorous animals from carnivorous lion and his cohort is the fact that, strength is worthless unless it is married with wisdom and humility. The second story of the spirit of stories revolves around the act gratefulness as characterized in the encounter of the man and the tiger he released from the Iron Gate. The intervention of the fox with its craftiness of tricking the tiger back into the cage again sensitised on virtue of gratefulness to benefactors.

Acting of the human and animal characters in the tortuous adventure to the forest of thousand daemons is enhanced with fragmentary set of the forest and the hunter’s homestead as an alternative to naturalism that suggests nature on stage.

The restricted realism style of setting allows for selection things that will portray the location as typified in leaves and drawings on the set.

General and specific illuminations were not how ever fully realised due to limited lighting facilities in Oduduwa Hall. There was also occasional seizing of sound from cordless microphones deployed to enhance audibility of actors and actresses.

Murder of Bolanle Raheem: Mandatory duty of hospitals to admit and treat victims of gunshots without any excuse