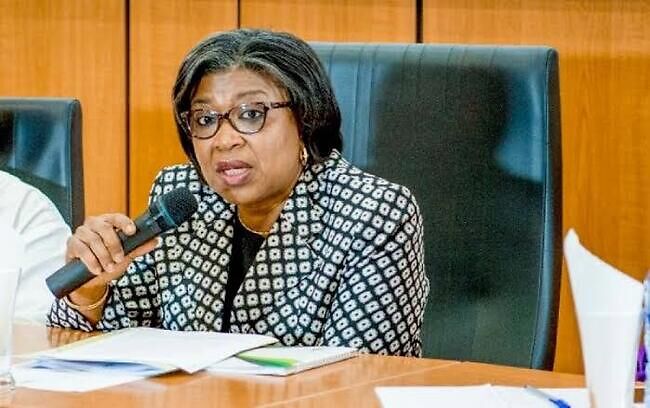 AS Nigeria continues to grapple with increasing debt burden, the Director-General of the Debt Management Office (DMO), Ms Patience Oniha, has disclosed that the country’s total debt stock may hit N77 trillion by the end of Pres- ident Muhammadu Buhari’s administration in May 29, 2023.

This, she explained would come to fruition if the current Central Bank of Nigeria (CBN) Ways & Means, which has been accumulated from 2014 to 2022, and put at about N22.7 trillion is securitized, coupled with the N44.06 tril- lion total debt stock as at third quarter of 2022 (Q3 2022) and the N8 trillion new borrowings.
She added that securitiza- tion was the best option be- cause at the current interest rate charge of 18.5 percent, additional N1.8 trillion to N2 trillion may be incurred as in- terest if the government fails to securitize the CBN Ways & Means; hence the decision of the executive to work with the National Assembly to bring it into fruition.

Nigeria’s public debt rose to N44.06 trillion in the third quarter of 2022 as it continues with repayment burden.

The Director General stated this in Abuja on Wednesday during the public presenta- tion and breakdown of the highlights of the 2023 Appropriation Act.

She said, “The DMO re- leased the figure for the country’s debt stock as at September, you don’t expect it to be significantly deferent from December.

“Secondly, there are a lot of discussions on the CBN’s Ways & Means.

“In addition to the signific- ant costs saving in loans ser- vice we would get by secur- itizing it, there is an element of transparency in the sense that it is now reflected in the public debt stock.

Once it is passed by the National As- sembly, it means we will be seeing that figure included in the public debt.

“You will see significant in- crease in public debt to N77 trillion. So, if you add the new borrowing depending on market conditions N5 trillion. So we’re looking anywhere at, it will be about N72 trillion.

“The other debt stock we are trying to highlight is to say the debt stock is also growing from the issuance of promis- sory notes which are not true borrowing as such by the gov- ernment. It will be safe to say that we will be looking at N70 trillion.

“While the debt is growing because there is new borrow- ing, revenue is receiving signi- ficant importance. Like DMO always says, you can’t talk about debt without talking about revenue. We need the two to work together”.

While explaining the debt management strategy of the government, the Finance Minister, Mrs. Zainab Ahmed, said the Total Public Debt as a percentage of GDP stood at 22.97 percent as at September 30, 2022, within 55 percent threshold recommended by the International Monetary Fund (IMF) / World Bank (WB) as well as Nigeria’s self-imposed limit of 40 percent set in the MTDS 2020- 2023, expected to increase to 35.33 percent after including the outstanding balance on CBN Ways & Means.

“Target Ratio under the MTDS 2020-2023 is 70:30, with the DMO expecting to achieve the target by end of the year 2023. The expos- ure to refinancing risk re- mained stable as a result of the strategy of issuance of long dated securities in the domestic and international markets in addition to accessing long term funds from multilateral and bilateral lenders”.

Mrs. Ahmed stated that “Nigeria is not planning on restructuring its debt as it remains committed to meet- ing its domestic and external debt obligations.

“The FGN will however con- tinue to utilize appropriate debt management tools to streamline the cost and risk profile in the debt portfolio, including through conces- sional loans, spreading out of debt maturities to avoid bunching, and re-profiling of the debt maturities by refin- ancing short-term debt using long-term debt instruments”.

In spite of the debt bur- den, the Minister of Finance, Budget and National Plan- ning said efforts were being made to ramp up the nation’s revenue base, noting that the Non oil revenues remain more stable than oil revenue, although government is doing its best to improve non oil rev- enue receipts tax administra- tion and sustained efforts to expand the non oil revenue base will be mounted.

“In addition, the tax system will be further strengthened over the medium term by im- proving collection efficiency, enhancing compliance, and reorganising the business practices of revenue agencies as well as employing appro- priate technology.

“Furthermore, efforts will be made to bring more busi- nesses in the informal sector into the tax net”, Mrs. Ahmed said.

She pointed out that the Federal Government lost about N6 trillion, which would have accrued to it as revenue as at 2021 for grant- ing pioneer status to some companies, hence the need to review the policy to enable the government to earn more revenue.