...as they pass vote of confidence in incumbent Chair, Oloyede Adekunle

Following the protest of some members of the ruling All Progressives Congress (APC) in Irepodun South Local Council Development Area, Erin-Osun on Thursday, the leadership and stalwarts of the party have disowned the protesters describing the streets demonstration as premature, misleading, miscarriage and self-serving. 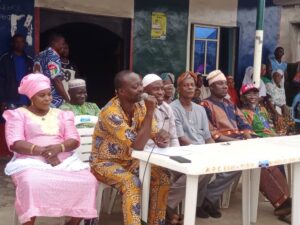 The hierarchy of the party comprised the Party Chairman in the LCDA, Hon. Mudashiru Anisere; Secretary, Hon. Adebayo Tajudeen; Vice Chairman, Hon. Jimoh Waheed; Youths Leader, Hon. Adeyi Akeem, Women Leader, Hon. Yusuf Bola among others who convened at the Party Secretariat in Erin-Osun on Friday morning passed a vote of confidence in the leadership of the incumbent Chairman, Hon. Oloyode Kamal Adekunle. 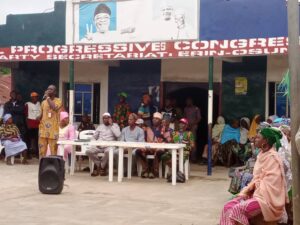 The Irepodun South APC leadership also expressed their loyalty and solidarity to the administration of Governor Adegboyega Oyetola and the State leadership of the party as the state set for Local Government Election. 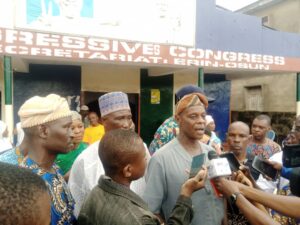 Speaking on behalf of the party executives and members, the APC Chairman in Irepodun South LCDA, Hon. Mudashiru Anisere, said the party was resolute to resist any action capable of undermining and truncating the peaceful atmosphere reigning in their domain.

Hon. Anisere who frowned at the protest staged by a session of the party noted that those that were involved in the protest were not known to the party as their action was being sponsored by members of the opposition to destabilize the ruling party.

He called on members of the public particularly loyalists of the APC in Irepodun South LCDA to disregard the protesters and their self-serving claims calculated to drag the soaring image of the party and accused personality into the mud.

The APC Chairman Irepodun South LCDA, however appealed to leaders and members of the party to recommit themselves to the ideology and ideals of the party just as he urged them to give their maximum support as the local government election approaches.

“Whatever anyone does that goes against the party, he or she is on his own. We didn’t send anybody to protest. Anyone who feels he or she is capable can contest as long as he or she is a member of the party, there is right to vote and to be voted for.

“We want members of the public to disregard in its entirety the protest as none of the leadership of the party is in the know of such. We remain resolute to promote and promulgate our party ideology and ideals and anything short of that, is not our making”, he added.

While reading the communique shortly after their brief meeting attended by some members of the party, the APC Youth Leader in Irepodun South LCDA, Hon. Adeyi Akeem said the protest was aimed to disrupt the incoming local government election in the LCDA.

The communique reads in part: “The Information reached us yesterday that some miscreants claiming to be the members of the All progressives Congress, APC, were protesting on the streets of Erin – Osun to the palace of Elerin of Erin-Osun in Irepodun South LCDA.

“The said protesters who were protesting against the Government led by Hon OLOYEDE KAMAL ADEKUNLE ‘JK’ and his candidature for the forthcoming Local Government Election are not members of our party, APC.

“That they were being sponsored (by the opposition party and TOP members) to destabilise our great party APC, and their plan is to distrupt the incoming local Government Election slated for 15th October, 2022.

“That we want the loyalists of APC and masses of Irepodun South LCDA to disregard the said protest, as their aims and objectives is to create unnecessary tension and intimidation in our society.

“That leadership of the All Progressives Congress, APC are solidly behind the Government led by Hon. OLOYEDE KAMAL ADEKUNLE in Irepodun South LCDA, and his aspiration in the forthcoming Local Government Election.

“That we pass Vote of Confidence in HON. OLOYEDE ADEKUNLE J.K. both his Government and his candidature.

“That we implore the people of Erin – Osun and the loyalists of APC to count yesterday protest as misleading, miscarriage and blatant lie.”

Echoing the unanimous position of the party executives, the overall leader of the APC in Irepodun South LCDA, Alhaji Sulaiman Oyetade described the protest as despotic aimed to destroy the party saying none of the elders of the party was informed.

According to him, the nomination of the incumbent caretaker chairman to run for chairmanship position in the forthcoming Local Government Election was based on his excellent and outstanding performance over the years.

Alhaji Oyetade added that the incumbent caretaker chairman was chosen based on his absolute loyalty, experience and grassroots political stand with the party.

2023: I’m not Stepping Down for Anybody – Prince Adebayo