She planned killing me, poured water on the floor, I slipped —Husband

•He stopped me from my trade, made me join his business, then frustrated me out —Wife 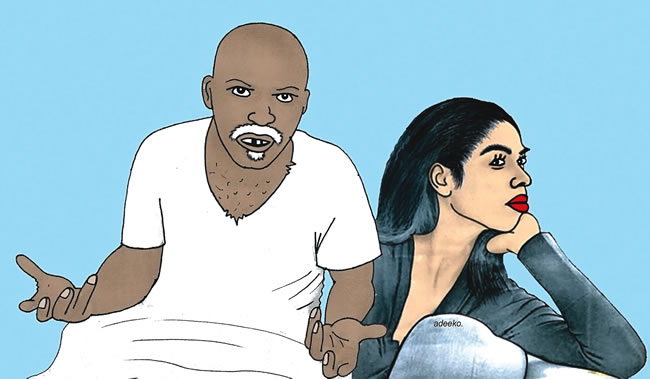 A man, Idowu Olarenwaju has told Grade A Customary Court, Mapo, Ibadan, Oyo State, that he is no longer interested in his marriage which he contracted over 20 years ago with his wife, Adeola Olanrewaju.

Idowu is seeking divorce on the accounts that his wife is domineering, diabolic and unfaithful to him.

He also said that she abandoned her duties towards him and turned their children against him.

The plaintiff further stated that the defendant planned to kill him.

Adeola did not accede to divorce and also denied all the allegations brought by her husband against her.

Idowu, giving his testimony, said, “I met my wife while she was hawking her wares. I approached her for a relationship and she agreed.

“I impregnated my wife while we were dating and she moved in with me.

“We did not carry out any marital rite. I did not pay the bride price because her parents stood against our relationship from the outset.

“Adeola started showing her true colour immediately she moved into my house.

“I discovered that my wife is domineering in nature. She loves to dictate the tune.

“I have a business which I run in her name. Adeola to my chagrin attempted to take over my business.

“I again raised some turkeys in our compound which my wife sold without my consent and kept the proceeds from them.

“My lord, same goes for my house. I built it with my hard earned money and have the C of O in my possession, but my wife kept telling whoever cares to listen that we both built it. I get infuriated any time I hear this and have warned her to desist from making such false claim.

“My wife still bent on taking over my property went diabolic. She has delved into devilish practices with the aim of either sending me out of my house or killing me.

“I locked our bathroom door after she intentionally poured water on the floor and I slipped. Her plan was that I slip and knock my head on the floor, but this failed.

“Adeola in order that she might gain more grounds in the house turned our children against me.

“I have been solely responsible for our children’s welfare and most importantly their education, but my wife still indulges in soiling my image by saying I am irresponsible.

“I gave our second child N15,000 about two weeks ago for her NYSC registration exercise, yet Adeola will go about telling everyone that I fail in my responsibilities towards our children.

“He teaches our children to abuse me, while our first child never greets me.

“My wife has stopped cooking for me and hardly greets me.

“We don’t interact or interfere in each other’s business. We carry out our activities in the home separately.

“Adeola is unfaithful to me. She threw caution to the winds and started bringing home her lovers.

“I once met her with one of them in our living room. She felt I was going to create a scene, but I quietly went into our bedroom, took what I came home for and went back to my shop.

“At another time, I caught her discussing with another man in our compound late in the night.

“My lord, I am fed up with my wife’s atrocities. I came to court because she will succeed in her plans to kill me if I fail to act fast.

“I appeal to this court to end our marriage, “the plaintiff said.

Adeola in her testimony explained that, “My lord, my husband lied that I am domineering in nature.

“I was initially selling foodstuff, rice and beans precisely in the market and used to travel to the North to buy my goods, but my husband stopped me from travelling. He told me both of us can’t be on the road all the time.

“He is selling electronics and demanded that I joined him in his business. I abandoned my trade and joined him, but he ended up frustrating me.

“I served him for five years in the business, but had nothing to show for it. He never gave me a dime as my share of the proceeds from the business.

“He later asked me to leave. I did and got another shop to sell my goods.

“He doesn’t know how much I spent when our first child sat for his school certificate examination and gained admission into the university.

“I paid for his West African Examination Council (WAEC) examination thrice before he gained admission into the university.

“I was also responsible for his tuition, feeding and accommodation throughout his university days.

“I was doing this faithfully and also attending to his younger ones.

“My lord, my husband bought the piece of land we built our house on after we got married.

“We both contributed towards buying the land and erecting the building, but he now threatens to throw me out.

“I borrowed money from my mother to buy the roofing sheets we used for our house, while I provided the money for the planks from my purse.

“We built the shop in my name and rented out a part of it. My husband gave me nothing out of the rent paid. He later collected the shop’s documents from me.

“My lord, he is presently building another house and I lent him N200,000 out of the sum he used in purchasing the land.

“My husband fought me anytime I demanded for a refund of the money. He later told me he would be paying me N500 per day. He did that for a month, meaning he paid N20,000 out of it and stopped.

“Our children and I now bathe outside the house since he put the bathroom under lock.

“He told me he has seen a one-room apartment which he wants me and our children to move into, but I told him if he wants divorce he must be ready to release either the house we are presently living  in or the one under construction, “Adeola said.