We are presenting only credible candidates

“I want to advise political parties to insist that accreditation should happen and not be said to have happened.” 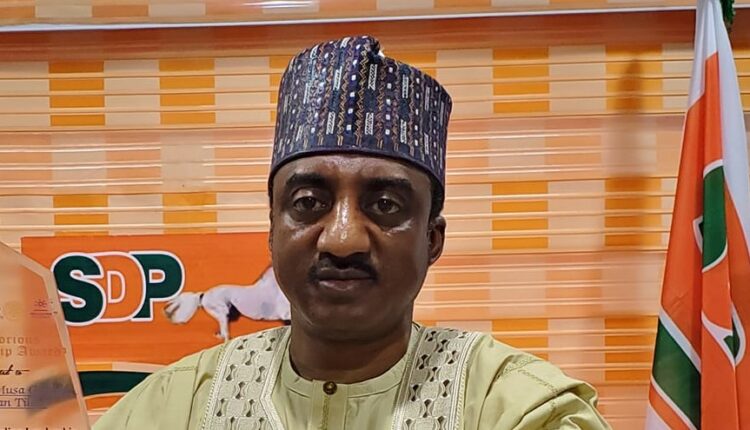 As the preparations for the forthcoming General Elections hot up, the National Chairman of the Social Democratic Party SDP, Alhaji Shehu Musa Gabam at the weekend said that the Party had successfully presented only Credible Candidates without any pending cases of criminal or corruption charges hanging on any of them to the Independent National Electoral Commission, INEC  in readiness of the Party to rescue the nation from the mess created by the two highly rated Political Parties, the Peoples Democratic Party, PDP and the All Progressives Congress, APC in the country.

According to him,” this is shameful, our Electorates should go for the best the SDP is offering, we have the integrity, that’s what we telling the Electorates now, we must rescue our country from hawks parading themselves as our Messiah, they  have all the facts on how they mismanaged our resources and they are now exposing themselves, Nigerians should reject them for the alternative which our SDP

” With the Credible Candidates we are parading, am sure a resounding victory at the polls all around we are proud of being the third largest Party in the country and we are ready to storm the country, win the polls and change the nation as envisaged by the founding fathers of the Party”.

“We are expecting all our candidates to go out and campaign. You must reach out to voters. We are going to be present in polling units that is why we made provisions to give you the list of voters in all polling units across the country.

Gabam also stressed the need for all candidates to have agents across the polling units in their constituencies, noting that “polling agents are necessary to prevent vote buying and manipulations”

Also Speaking, the governorship candidate of the Social Democratic Party, SDP, in the June 18, 2022, election in Ekiti State, Segun Oni urged all the Political Parties for the polls to unite and dialogue with the INEC oh to make the Elections successful

According to him, ” the normal songs that Elections will be free and Fair is not enough, the electoral body must follow the provisions of  the new Electoral Act to the letter and not what happened in Èkìtì state

Former  Gov Oni revealed how certain elements in the business of election rigging approached him and offered to help him rig the Ekiti governorship election.

He said crafty salesmen who were professionals in writing election results called him two days before the Ekiti poll but he rejected the ‘Greek gift’ because he was an advocate of due process.

Oni, while addressing the stakeholders stated: “Don’t think the upcoming election will be free and fair, so be prepared. The Independent National Electoral Commission (INEC) can spin embarrassment on anybody including the ruling party. We will assume fairness but the unfair character that comes out in the process can be served to anyone.

“Two days before the Ekiti election, I was bombarded with a lot of calls from crafty salesmen who are in charge of election results writing. They approached me and told me that they can help me manipulate results but I disagreed and told them to market it elsewhere.

“I heard that some candidates sign into the result padding. But the issue is, it could be frustrating if we as a country can’t sign up for an election that should be free and fair. Therefore, I am challenging INEC to be more transparent and prove to parties that they would be transparent. The process they have put in place may seem to run well but will it be allowed to run well?”

While recalling that his legal team was prevented from having access to inspect election materials during the Election Tribunal in Ado Ekiti, he warned that irrespective of the innovations brought by INEC, the process could still be manipulated by desperate politicians.

He added: “Accreditation has been taken beyond manipulation. I want to advise political parties to insist that accreditation should happen and not be said to have happened. For instance, the paper they were shuffling in Ekiti was disguised as accreditation. At the tribunal, we requested for INEC to give us access and inspect the Bimodal Voter Accreditation Machine Systems (BIVAS), the tribunal granted us access before it started and when iz started sitting, we told them that INEC refused their instruction. They reissued the order but I can tell you that we the SDP were not allowed access to inspect BVAS, used and unused ballot papers by INEC. INEC believe it has gotten away with that, unfortunately, political parties who were rigged out are not asking a question.”

On his part, the national chairman of the SDP, Alhaji Shehu Musa Gabam, who declared that the party was ready for the elections, assured Nigerians that all the candidates put forward by the party won’t disappoint if voted into power.

He said: “If Nigerians are looking for young people, we have provided the needed people at every level from the governorship to the national assembly to state assemblies. We didn’t go for revenue generation when we were choosing candidates but we went for quality people.

Other Speakers included the National Secretary, Dr Olu Agunloye, Presidential candidate Prince Adewole Adebayo Deputy Director General of SDP Presidential Campaign Council, Dr Lami Hamadu, and the Adamawa State Governorship Candidate, Dr Umarr Ado amongst others expressed optimism that the Party would take the nation by Storm with the way it was being administered by its leadership u, Alhaji Gabam.