What Happens to Your Body When You Eat Potatoes

by The Source
in Health
0

The U.S. ate nearly 110 pounds of potatoes per capita in 2019, according to the most recent statistics from the Food and Agriculture Organization. You might say that makes us a nation of Mr. and Mrs. Potatoheads. However, being such savants of the starchy tubers, it’s hard to imagine we don’t know everything about potatoes and health.

For instance, when many think of “carbs,” potatoes are perhaps among the first foods that come to mind. Also, most people are probably aware of the fact that potato-forward dishes like French fries are not as healthy as—say, carrot sticks—and can increase your risk of developing cardiovascular disease due to their high fat and salt content if eaten in excess.

So, what are things you probably don’t know about tater tots and their lot? Here are some of the things that happen to your body when you eat potatoes.

1.Your gut health may improve 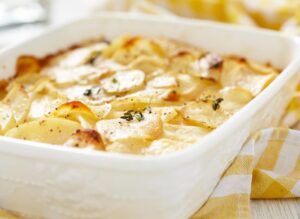 If you’re worried about those piping hot mashed potatoes raising your blood sugar, let them cool off before eating. When you eat potatoes that are hot, their starches are quickly digested into glucose, which raises your blood sugar. But when cooked potatoes are allowed to cool, their starches change into what’s known as a type 3 resistant starch, which acts as both soluble and insoluble fiber in that it can’t be digested—hence its name.

In resisting digestion, the sugars from this starch are not absorbed into the bloodstream. Instead, the resistant starch moves into the large intestine, where it is broken down by healthy bacteria, and as a prebiotic, it feeds your gut microbiota. Keeping your gut microbiota healthy can reduce your risk of developing a number of health conditions, including inflammation, irritable bowel syndrome (IBS), and even colon cancer.

2.You’ll feel fuller after eating them, which can support weight loss.

Low in calories, high in water content, and with moderate amounts of fiber and protein, when prepared with health and wellness in mind, a serving of potatoes can be good for weight loss, especially when you consider how filling they are.

Boiled potatoes scored a 323 rating on the Satiety Index of Common Foods, the highest for the satiety of the 38 foods tested, which is higher than other satisfying foods like eggs, beans, steak, and fish. In a 2018 study titled “Subjective Satiety Following Meals Incorporating Rice, Pasta and Potato,” researchers compared participants’ feelings of fullness after eating meals that included these foods and found that people felt less hungry as well as more full and satisfied after eating meals with potatoes.

3.Due to some of the ways potatoes are prepared, you may also gain weight if you eat too much of them 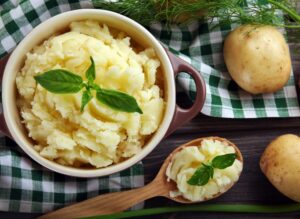 Potatoes on their own aren’t very high in calories. But how they’re prepared and the portion sizes you eat ultimately makes a difference in terms of their potential nutritional value and propensity to cause weight gain. For example, a one-cup serving of butter-based potatoes au gratin, which typically includes breadcrumbs, cheddar cheese, and milk reportedly contains 323 calories and 11.6 grams of saturated fat.

The regular consumption of French fries has also been known to cause weight gain. For instance, a 2007 study from The American Journal of Clinical Nutrition found that eating fried foods like French fries was directly linked to obesity. The likelihood of gaining weight is further exacerbated if—like many others—you order fries alongside a fast-food entrée. A large order of fries from McDonald’s contains 500 calories, which is only 40 calories less than that of its signature Big Mac. Between this burger and a large order of French fries, lunchtime at the golden arches could become a 1000+ calorie affair.

Anytime you eat carbohydrates, your blood sugar may rise. Elevated blood sugar over time can lead to prediabetes, insulin resistance, and Type 2 diabetes. If eaten regularly, fried potatoes, like French fries or chips, may increase your risk for diabetes, high blood pressure, and heart disease.

According to Goodson, even those highly satisfying, nutritious boiled and baked potatoes can elevate blood sugar and increase diabetes risks—but so can other healthy carbs like oatmeal, brown rice, and whole grain bread.

“The key is to pair potatoes and other carbs with a protein like lean beef, chicken, fish, or eggs,” Goodson advises. “Protein helps slow down digestion, and thus helps to flatten the blood sugar curve preventing a spike.”

5.Your Memory May Be Negatively Affected By Fried Potatoes.

Potatoes’ potential impact on your brain health again essentially boils down to how they are cooked.

“Deep-fried potatoes and other deep-fried foods have been linked in studies to weakening focus, increasing memory impairment, and also increasing inflammatory responses in the brain,” says Mary Wirtz, MS, RDN, a registered dietitian and consultant for MomLovesBest.

Similar to foods and beverages that are high in added sugars, when potatoes are fried, they are more likely to have an adverse effect on memory and cognition. For example, one study published in the Journal of Nutritional Science demonstrated that participants whose diets included the most fried foods scored the lowest on tests of memory and cognition.

6.Your skin may age faster if you eat high intakes of fried potatoes.

Not to pile on French fries, but they are among the worst foods you can eat. According to registered dietitian Johna Burdeos, RD, the high-temperature oil needed to fry potatoes and other foods can create harmful compounds called advanced glycation end products (AGEs), which accumulate in the body as we age.

“Consuming too much of these foods can result in cellular damage and inflammation, which can speed up the aging process. The inflammatory response in the skin is seen in visible signs of weakened skin elasticity—wrinkles, puffiness, and acne,” says Burdeos.

Obviously, taking the skin off potatoes and soaking them in oil to fry them may not be the healthiest way to eat them. However, if you must have your fries, Goodson suggests leaving the skin on your potato, then air frying them or roasting them in the oven.

7. You may have more energy for exercise. 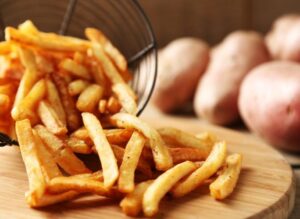 According to Goodson, a medium potato is a nutrient-rich source of carbohydrates, providing the body with about 26 grams of complex carbohydrates to help fuel exercise. Again, keep in mind that this tater-consuming benefit comes from choosing the right potato prep—think boiled or baked.

Bulletproof Cars Won’t Save You From Wrath Of Uneducated Children, Lawmakers Warns Govs

Islamic Finance Sector To Grow In Crypto, Others – Report

5 Fruits To Give Your Skin That Spotless Ageless Glow

‘Health Insurance Would Be A Relief’

Bulletproof Cars Won’t Save You From Wrath Of Uneducated Children, Lawmakers Warns Govs