“In those days if you are not qualified, you cannot be in the Awolowo’s party” 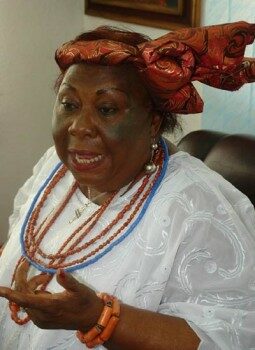 First Programs Director, Nigerian Television Services and Rights Activist, Chief Rita Lori-Ogbebor has noted that qualifications and brilliance were one of the prerequisites for joining the political party of the late Chief Obafemi Awolowo.

The Itsekiri woman made this known while reacting to the state of the nation as the 2023 elections draw closer.

Lori-Ogbebor, however, expressed dissatisfaction over the level of illiteracy amongst the locales in the country.

She also stated that power was in the hands of the state back then unlike now; hence, the reason why most states cannot boast of development.

“In those days if you are not qualified, you cannot be in the Awolowo’s party.

“ I grew up in the western region under the tutelage of Awolowo. You have to be brilliant.

“But today the second problem we have is that all the local people are not educated.

“In those days, our power was in the state. That will why most states cannot boast of development” She said.

LEADING rights lawyer, Mr Femi Falana, on Tuesday addressed the controversial move by the nation’s secret police to arrest and detain the embattled Governor of the Central Bank of Nigeria (CBN), Godwin Emefiele…

Speaking about the ideal man for the 2023 presidency, She said Nigerians should vote for a man who has the image and concept to say this is how we are going to direct the nation holistically.

Rita described the man as one with a holistic idea of moving the country forward.

She added that the history from his background should also be considered.