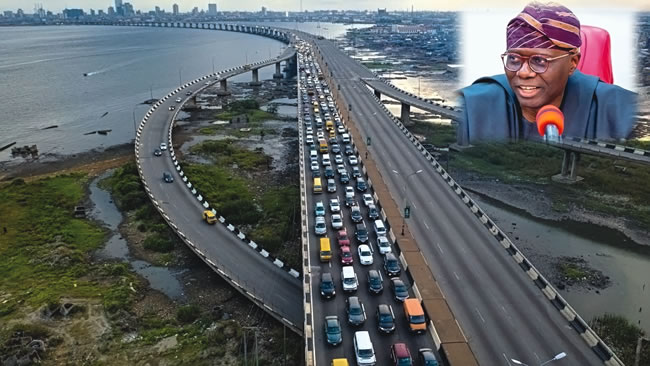 BOLA BADMUS, DAYO AYEYEMI and SUBAIR MOHAMMED speak with some people with major stakes as the Lagos State government moves on with a project expected to lift the state but which will affect hundreds of families in the state.

AS excitement builds over the proposed construction of the Fourth Mainland Bridge in Lagos State, it has been disclosed that about 48 estates will be affected.

Special Adviser on Work and Infrastructure to the state governor, Mrs Aramide Adeyoye, made the disclosure while assuring affected property owners that adequate compensation, in line with international best practices, had been made to cater to the imminent loss of their property to the construction work.

Speaking through the Project Director, Mr Tokunbo Ajanaku, Adeyoye, an engineer, said the state government had carried along the 48 estates, traditional rulers and others that would be affected by the bridge.

On the issue of compensation, Ajanaku said: “This project passes through Lagos and Ogun states, so it is a Lagos State initiative for Lagos State and Ogun State driven by Mr Babajide Sanwo-Olu and that means all of the corridors within Lagos and those within Ogun State, there is a harmonious and integrated approach to settlement and that is what we will do and each party will be properly compensated and resettled where necessary. The approach is going to be holistic. I think the issue of compensation is not the case. It is actually a composite plan to make everybody happy.”

But property owners and other stakeholders are still worried about adequate compensation and resettlement, though the two state governments had created a platform known as Panel Review Meeting on the Environmental and Social Impact Assessment (ESIA) to discuss the project and its impacts.

“We will like to know from the governments of Lagos and Ogun states the standard for compensation, the exact amount to be paid to each of us, among other issues, as anything other than this will amount to forced eviction,” Oriloye stated.

Don’t panic, even tenants will be compensated –Commissioner

Lagos State Commissioner for Information and Strategy, Mr Gbenga Omotoso, however gave the assurance that compensation would be adequate.

Speaking to Saturday Tribune, he said dwellers of Ijede and other areas would be captured in the compensation arrangement, asking the people, in Yoruba language, not to panic.

He said: “This has been our tradition. You will recall that recently, when we were doing the Red-Line channel, before the construction took off in 2021, we had compensated everybody involved. We compensated all the landlords and for the first time in the history of Nigeria, we compensated the tenants for the discomfort that they had suffered because of the construction as they were asked to leave their homes suddenly and abruptly. They had to leave because of that project. This is not going to be an exception.

“So, there is no need for anybody to panic. The project is at its initial stage. We haven’t even done the groundbreaking but we are very sure that the project is going to be executed. We cannot execute the project without compensating the people whose homes are going to be taken away because of the project.

“There is no issue about that at all. They should relax. And like Asiwaju would always say, e f’okan bale.”

The proposed Fourth Mainland Bridge, according to the chairman of the Community Development Committee (CDC) in Ikorodu Local Government Area, Mr Lukman Shonibare, is a blessing to residents in the axis who have been clamouring for another exit road.

Shonibare urged residents and the affected property owners to persevere, saying the project would bring about development.

He said: “Residents of Ikorodu have been clamouring for another road exiting Ikorodu. The proposed Fourth Mainland Bridge is going to be a blessing to the entire people of Ikorodu. Some people must make sacrifice for something that will bring blessing to the larger population.

“The Lagos State has done it in such a way that the number of people that would be affected would be minimal and compensation will be given to the affected property owners.”

His Agbado Oke-Odo counterpart, Mr Ernest Kasunmu, said the project, should not be allowed to make residents and property owners homeless.

He said: “We are not directly affected but it is about development. With the Fourth Mainland Bridge, the Lagos State government is trying to further develop and widen the economy of the state but in doing this, residents must not be made to suffer. They must not be subjected to hardship and homelessness in the name of development.

“So, as long as the proposed bridge is a welcome development, I would like to see all affected property and business owners and tenants to be compensated. They must not be made to bear the brunt of development and expansion in the state.”

A business owner and chieftain of the All Progressives Congress (APC) in Ikorodu, Mr Oluwatosin Onamade, lamented the adverse effects of the project on businesses in the axis.

Onamade, who is the Managing Director of Western Funeral Homes Limited, disclosed that businesses had been crippled by the planned demolition of marked buildings.

He said: “The construction has reduced incomes. Some axes have been blocked and those buildings that have been marked for demolition, potential clients have moved away to other areas and this has partially collapsed businesses.

According to him, the Land Use Act stipulates a process for compensating affected residents or property owners.

Besides, he said the Lagos State government has a process for paying compensation and resettlement.

“The ESIA should have addressed some resettlement action. There is a component of it they also refer to a Resettlement Action Plan.

“Those that need to resettle, I believe the recommendation would have been made and they need to be resettled,” he said.

Ogunleye, a former president of the Association of Town Planning Consultants of Nigeria (ATOPCON), implored the state government to work hard to prevent social backlashes.

He said:”Technical issues can be taken care of – mostly engineering, if you need to divert water course or reclaim a land and so on. But the real concern is the social reaction. When people are adequately compensated, there won’t be much problem; they will see the project as their own. That will bring the positive aspect of the project to the communities.

“Government needs to watch out on social issue, particularly compensation. People are going to lose their jobs, farmlands and properties. You have to compensate them and they need to get the compensation at the right time.”

We are concerned about significant negative consequences –FG

The Federal Government has however said that it is taking note of the significant negative consequences of the “laudable” project.”

Minister of Environment, Mohammed Abdulahi, through Mr Gomwalk Celestine, said: “Despite the laudable benefits associated with the proposed project and considering the biophysical and socio-economic nature of the proposed corridor, the project was envisaged to have significant negative social, economic, health and environmental consequences, including resettlement issues for numerous Project Affected Persons (PAPs).

“It is the responsibility of the Federal Government, in collaboration with other tiers of government and relevant regulatory authorities, to ensure that these negative impacts are adequately identified and effectively mitigated while the attendant positive impacts are realised for project and environmental sustainability.

“As policymakers, we must ensure adequate provision of an enabling environment for investments in critical infrastructure such as this project for Nigeria to achieve the 2030 Agenda for Sustainable Development and Nigeria’s commitment to Net Zero by 2060.”

People can say whatever they like, but Portable is a genius —Humblesmith